What's up my Bitches?

You aren't bitches, but that is my favorite greeting, so I used it. I may or may not use it again.

So I have not been posting lately, mainly due to laziness. I have so many things I want to say, but then I remember that there is a new episode of The Real Housewives I haven't seen (I watch them all), or I want ice cream or I would rather cuddle with my cat.

Which brings me to the next two pieces of news, in case you aren't stalking my Facebook page:

When I lived in California, owning my own place was simply not realistic, and because I never had my own place, I did not want to bring an animal into that uncertainty. I wanted to make sure that I could commit to caring for an animal in one place.

I got my beautiful black cat, Zack from Pet Supermarket, after closing on my home. I was just walking by the window one day, looking at cats and I noticed a beautiful black cat with a little spot of white stray hairs on his neck and shiny green eyes. He was shy and did not move, he just looked at me, and then looked away. I was told that he was a year and a half old, and that he had lived in the shelter all his life, and that nobody had adopted him yet. I wondered what it must have felt like, watching all his other cat buddies get adopted, but not him? When I saw him at the shelter, he was with a brown tabby cat named Alice. He was snoozing with her.

I always want to take cats home when window shopping, but I could not stop thinking about the beautiful black cat I saw. If he wasn't adopted by the time I came back, he would be mine. I thought it was sad that he had never been adopted.

Lo and behold, he was still there a couple of days later, and I started the adoption paperwork. I took him home for good a couple of days later. I liked his friend Alice, and when he got put in his crate, she looked at me and gave me a look of "why not me too"? I felt a little guilty, but I later heard she got adopted a few days later.

Anywho, here is my new cat in my new home. He was shy for the first couple of months, but he has warmed up to me lately. Once in a while when I fall asleep, I will wake up to him next to me, purring. 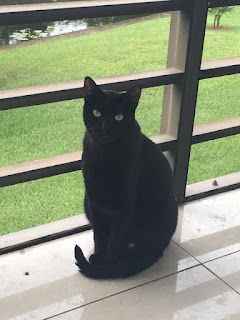 This fierce feline has some moves !